Littering is defined by when waste or discarded materials are disposed of in an improper manner, in unwanted locations. It is even classed as a type of pollution. Littering has tragic consequences on the environment. As humans consume natural resources, they, too, create by-products that enter Earth’s ecosystems. This includes plastic waste, water pollution, soil runoff, and glass such as jars and bottles are just a few of the man-made products that can harm the Earth and the species that live on it. The damage can be physical (Getting tangled around marine life), or chemical (fertilizers causing algal blooms) but in both cases they can cause lasting damage to the nature and wildlife of an area. Some of the effects littering has on the environment are:

Dumping litter on sidewalks or along curbs, often causes it to get washed down in to storm drains during a heavy rain. Eventually this water leads to the nearest river or ocean. If the water becomes polluted from litter we can no longer use it for drinking or recreation. Dumping plastic rubbish, including grocery bags, quickly fills up landfills and regularly clog drains. Plastic litter can drift out to sea, and if you have seen Blue planet II, you will know animals like turtles or dolphins may ingest the plastic. Animals may mistake the items of litter floating in the water as food and could choke on them or they may get entangled in it. The plastic creates horrendous health problems for the animals, which can include depleting their nutrients and blocking their stomachs and intestines. Animals cannot break down plastic in their digestive system and will typically die from the obstruction. Parts of plastic can also get tangled around animals’ bodies or heads and cause injury or death.

Litter in water supply from consumer and commercial use creates a toxic environment. The water is ingested by deer, fish and a variety of other animals. The toxins may cause blood clotting, seizures or serious medical issues that can kill animals. The toxic water may also kill off surrounding plant life on riverbanks and the bottom of a pond’s ecosystem. When humans eat animals that have ingested compromised water supplies, they also can become sick.

The presence of litter makes a place unclean and very unpleasant to the eyes, damaging the aesthetics of a place. Not only does litter look dirty, it may carry germs. Some animals are attracted to areas with lots of litter. They find their food among the trash and can pick up the germs and become carriers for diseases that may make people sick. Litter is bad for the environment. It wastes our natural resources. When cans and bottles are discarded on the roadside instead of being recycled, more resources must be used to create cans and bottles from new materials. 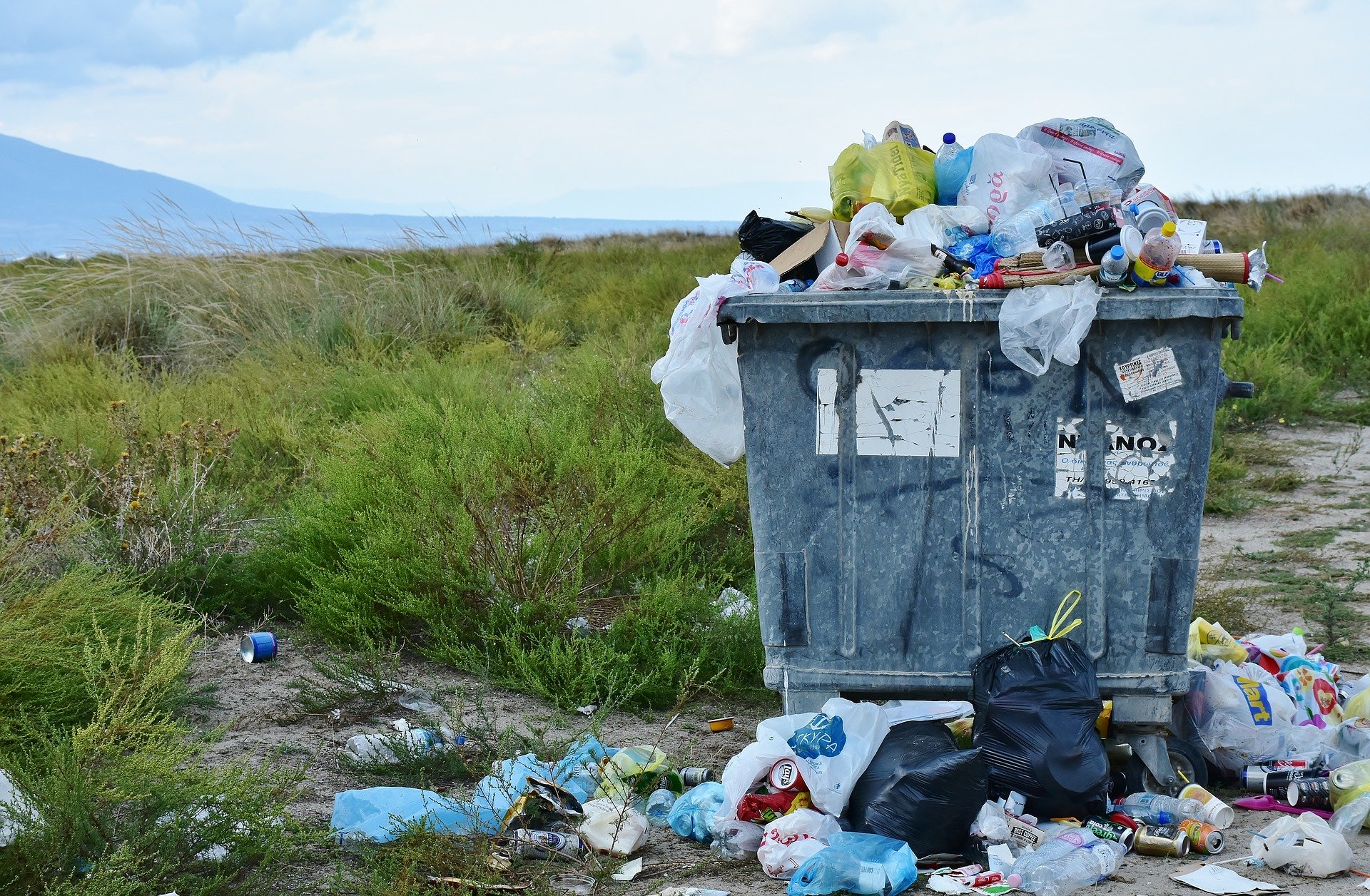 Littering Is Accountable For The Death Of Millions Of Animals

Countless animals die every year thanks to littering. . Animals can get entangled in littered objects and die a slow and painful death. Items like broken glass, pins, and other sharp objects present in the litter can injure animals who tread on them unknowingly. Some substances present in the litter can be ingested by animals and produce toxic effects inside their bodies, irreversibly harming them.

Littering Can cause Soil, Water, And Air Pollution

Hazardous chemicals can leak out of the litter and pollute the soil and nearby water. These toxins eventually enter the human body via the food chain. The contaminants also inhibit plant growth and can cause health issues in animals. Littering can actually lead to air pollution. Frequently, litter is burnt as an easy way to get rid of it. The burning process can emit a substantial amount of toxic particulate matter and gases into the air. The pollutants can then lead to respiratory problems and other health problems in humans and other living beings.

Sharp objects, toxic chemicals, and other discarded objects can also cause physical harm to humans. Pathogens in the litter could even lead to an epidemic. Also accidents could result when vehicles come in contact with waste.

There Is A Possibility Of A Fire

When the litter contains flammable materials, a small spark or even lightning can immediately start a fire. Such fires can become uncontrollable and lead to large losses of lives and property. Accidental lighting of litter can even cause wildfires. For example, discarded cigarette buttes that have not been fully put out can cause fires.

Cleaning Up Litter Is Costly To The Economy

If waste is disposed the public at the correct places, cleaning the waste becomes fairly simple for the personnel involved. However, when there is litter that needs to be cleared up, extra funds are needed to pay people to properly clean up the littered locations. Consequently, litter clean-ups costs the economy significantly more than cleaning up waste disposed of responsibly in the proper manner.

In conclusion, trash can travel throughout the world’s rivers and oceans, accumulating on beaches. This debris harms physical habitats, transports chemical pollutants, threatens aquatic life, and interferes with human uses of river, marine and coastal environments. Plastic waste has the greatest potential to harm the environment, wildlife and humans. It can be found floating at the surface, suspended in the water column, or on the bottom of almost all water bodies. It is transported by rivers to the ocean, where it moves with the currents, and is often eaten by birds and fish, concentrating toxic chemicals in their tissues, and filling their stomachs, causing them to starve. Plastic aquatic debris is much more than a mere aesthetic problem.

What can you do?

Raising awareness to the general public and the future generation is key to reducing littering in the UK, and there have been lots of effective anti-litter campaigns. Each local council has its own approach… here are some recent examples:

The Ballot Bin is a customisable bespoke ashtray that tackles cigarette butt litter. Tackling litter whilst posing a question may not seem to go hand-in-hand but in just six weeks, the voting ash-tray on Villiers Street reduced the number of smokers throwing their butts on the floor by 20% and went viral, reaching 6 million people online. It has since been replicated across the world and has been proven to cut litter by up to 46%.

The bins with double slots asked people to vote on light-hearted questions like ‘Batman or Superman?’ and people were asked to put their litter in their chosen slot to ‘vote.’ The key to the campaign’s success was simple; it made it fun to use bins!

We were proud to be a part of this successful campaign ‘Leeds By Example’, a campaign bringing together a ground-breaking coalition of local and national organisations to improve recycling of food and drink packaging currently disposed of ‘on the go’. Our CafeCrush reverse vending machines were a popular part of this campaign, and even featured on BBC.

In the first six months, the campaign almost doubled recycling on the go in Leeds City Centre from 17-32% by introducing 124 eye-catching new recycling points.

A collaborative campaign raising awareness of roadside litter, Highways England has estimated that it costs around £6m a year to collect litter from motorways, with more than 150,000 sacks of refuse collected annually. This averages out at 83 bags of litter are collected from each mile of motorway every year! Hubbub UK’s #drivedownlitter campaign was an eight-month social experiment testing new ways to tackle littering in two Kent service stations, using proven behaviour change and awareness raising techniques. These included roadside bins for car and lorry users and return and reward machines where motorists can swap their recycling for rewards. Unisan were proud to be a part of this with our CafeCrush reverse vending machines.

Drive Down Litter launched in June 2018 and has been hugely successful in attracting people’s attention, promoting debate, and generating media coverage around the issue of litter. The campaign successfully recycled over 8,000 plastic bottles and coffee cups combined at Maidstone services in Kent. Litter on the adjacent on-slip roads decreased by 60% and the campaign had a big impact on both staff behaviour and attitudes.

The campaign had a reach of 41 million people and gained over 40 pieces of media coverage including The Times, The Daily Telegraph, The Independent. 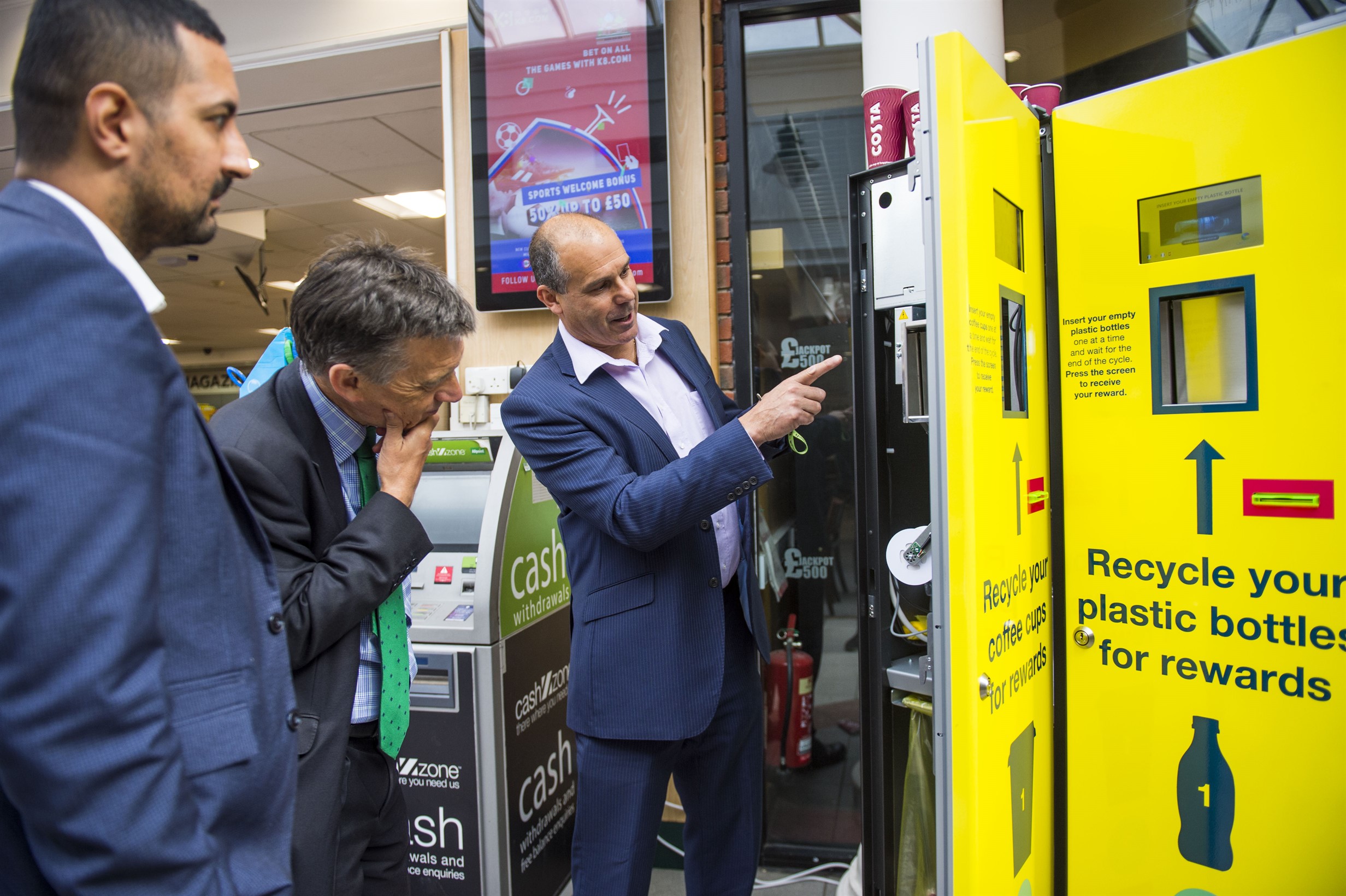 Clearing up litter in Essex costs a staggering £17 million per year. The campaign was set up with a focus on avoiding litter so money could be spent on essential services instead.

All of the district and borough councils in Essex backed the campaign, along with McDonald’s, KFC, Dominos, and 300 other local businesses. The Highways Agency and Keep Britain Tidy have also shown their support.

The campaign combined education and awareness with enforcement of rules. Messages about the fines that would be handed out to people dropping litter decorated posters, buses, and fast food packaging, as well as appearing on social media.

Local councils and businesses also joined forces and conducted litter picks. There was a 41% reduction in litter by the campaign’s third year as a result of this.

The key to the campaign strategy was getting everyone on board. With this increased awareness, it became a lot harder for litter bugs to dump rubbish.

This campaign was part of a three-month long scheme to keep the city’s streets clean while raising money for charity. Litter bins were turned into charity collection tins, and the more litter in the bin, the more money went to local charities.

Birmingham was one of seven areas that took part and the results speak for themselves:

8.9% more waste was put in the charity bins, There was 30%  less litter in the streets with charity bins

The success of this campaign boiled down to the fact that most people want to do the right thing, and if they think they’re doing two good deeds in one, they’ll be even more willing.

This was a campaign that was held for a week back in 2013. It was aimed at discouraging people from throwing rubbish from their vehicles. The campaign’s message was that people should take their rubbish home.

The campaign used posters, social media, press events, and more to spread its message and it had support from ScotRail, Transport Scotland, McDonald’s, local authorities and local businesses.

The main focus was on litter prevention, though there were also litter picks held as part of the campaign. During the week of the campaign, 400 bags of litter were collected.

The campaign instantly connected with people because it used language that people were familiar with, and in that way, it also seemed more down to earth than a usual public information campaign.

In conclusion more awareness needs to be created on how littering damages the environment, to help people make the emotional decision of doing the right thing, instead of doing the lazy or ‘easy’ thing of dumping litter. Making it easier to bin rubbish, or making it more fun and engaging has been proven by government campaigns to work. Maybe more bins in public places would be part of the solution!

We feel if more businesses did the right thing and recycled more waste, and recycled waste correctly, it would make a hugely positive impact on the environment, sending much less to landfill. Recycling doesn’t have to be complicated! At Unisan, our aim is to make recycling at work as easy as possible for your staff, thereby boosting your company’s recycling rates & reducing your carbon footprint. Through cutting edge innovation & design, we make bespoke recycling bin solutions that are engaging and easy to use. Start your journey with us today, and get ready to transform your recycling rates! Office recycling bins, warehouse bins, industrial recycling or waste bins, bins for manufacturing, bins for automative and food industry.… you name it, we have the solution!