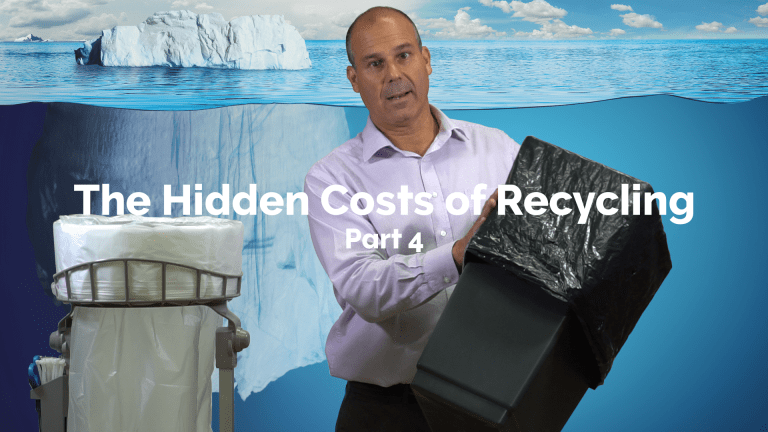 When it comes to recycling, are you just looking at the tip of your iceberg? It’s what’s under the surface that does the real damage. In this video series, Clive will walk you through the main hidden costs of recycling and how you can reduce them.

Welcome to the final video in the Hidden Costs of Recycling Series.  We’ve already covered bag overlap and double bagging, but the biggest cost is labour.  It has nothing to do with the cost of the bin and the liner.

Let’s go through the process – here we have an almost full bin.  First we need to go and get a bag from wherever the bags are stored, then come back and change the bin.  We tie the liner, sealing in most of the air – regardless of what’s in the bag, the majority is now air.  What we need to do is re-think that process; how can we reduce the labour?

If we have a system where we don’t have to go and get the bag, such as a continuous liner, where the liner is already on the bin, the process becomes much simpler.  I can now squeeze the air out, take a tie clip to seal the bag, cut the liner, and pull the liner through.  I haven’t had to go anywhere; it’s all here.

Your cost is in labour; not in the bin and the bag – it’s all to do with operation.  Now if you multiply this by 5 different waste streams, that’s when the savings really start to kick in.

Thanks for watching our Hidden Costs of Recycling Series.  For more information, fill in the form at the bottom of the page to get in touch.

Read on to watch the rest of the series.

Welcome to the third video in the Hidden Costs of Recycling Series.  In this video we’ll talk about double bagging and bags splitting.

We really need to look at why people are double bagging.  Sometimes it’s because the bag splits.  If it does, the mess is horrendous, and the time spent cleaning it up is a massive waste.  However, in our experience, double bagging usually results from lack of confidence in the strength of the bag.

This is a huge waste; it’s double the cost, double the labour, if not more, and it just doesn’t make sense in terms of the environment; you’re meant to be recycling, but instead you’re using twice as much single-use plastic.

To re-think this process, we need to look at something different.  This liner actually looks thinner than a standard bag, but in real terms, this is how strong it is – you don’t need to double-bag with a liner this strong.

Next week, we’ll be looking at the final major iceberg cost – probably the biggest of all: labour costs.  Come back on Tuesday 25th September for more!

Welcome to the second video in the Hidden Costs of Recycling Series.  In this video we’ll talk about bag overlap and half-empty bags.

This is a typical bin: a lot of the bag is folded over the top of the bin and is therefore completely wasted material.  Additionally, the bin is only less than half-full.  However, many companies will employ someone to empty this bin at the end of each day regardless of how full it is.  I call it the ‘banana skin’ where that bin will be emptied even if it only has one banana skin in it.

This is what typically happens when the bin is emptied; the bag gets tied, locking in all this fresh air, when in reality, this is how much of the liner is actually being used.  This is a huge waste of resources and a massive extra cost to the business.

Alternatively, this is a system where 100% of the liner is used, and a lot of the air is compacted out of the the bag before it is tied.  This re-thinks  the whole waste management process in your business.

Next week, we’ll be looking at another major iceberg cost: double bagging and split liners.  Come back on Tuesday 18th September for more!

You know you should be recycling more, but when confronted with 5 waste streams instead of only one, you shrink back, thinking that your waste management costs are about to be multiplied 5 times.

And so a conflict arises in your head; the environmental part of you knows you need to do this; for Corporate Social Responsibility (CSR), for brand perception, and for the planet. But the commercial part of you thinks of all the extra costs involved, and starts to wonder if it’s really worth it…

The bulk of your costs lie beneath the surface, and these are the ones you can really impact, and the ones that make a difference. Costs such as double-bagging, half-empty bags, and most importantly, the labour costs in emptying the bins.

Over the next 3 videos, we will talk about these costs in more detail, and how you can reduce them, so stay tuned for the next episode on Tuesday 11th September.

Can’t wait until then?  Fill in the form below to get in touch.