Understanding the hierarchy of waste is critical to compliance of the newly amended Waste Framework (Directive 2008/98/EC†).  So critical is effective waste management, the new Directive places it as the most important objective of any waste policy.

First, what is the hierarchy of waste?

Definition: The waste hierarchy generally lays down a priority order of what constitutes the best overall environmental option in waste legislation and policy.

The following waste hierarchy shall apply as a priority order in waste prevention and management legislation and policy: 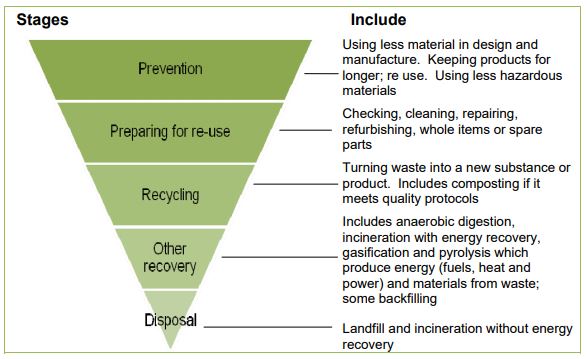 (b) preparing for re-use;

When applying the waste hierarchy, those who manage waste must take measures to encourage the options that deliver the best overall environmental outcome. This may require specific waste streams departing from the hierarchy where this is justified by life-cycle thinking on the overall impacts of the generation and management of such waste.

There is no definitive list of what is and is not waste. Whether or not a substance is discarded as waste – and when waste ceases to be waste – are matters that must be determined on the facts of the case and the interpretation of the law is a matter for the Courts. It rests, in the first place, with the producer or holder of a substance to decide whether it is being discarded as waste and the Environment Agency is responsible, as a “competent authority”, for the enforcement of waste management controls in England and Wales.

The waste hierarchy is a useful framework that has become a cornerstone of sustainable waste management, setting out the order in which options for waste management should be considered based on environmental impact:

Tesco has come out on top in a list of the UK’s best and worst supermarkets at preventing food waste.  Ranked  at a ‘B’ overall – no retailer achieves an ‘A’ by Feedback’s standards – while Waitrose gets a pitiful ‘F’, providing no public data on its waste and redistributing only small amounts of surplus food. 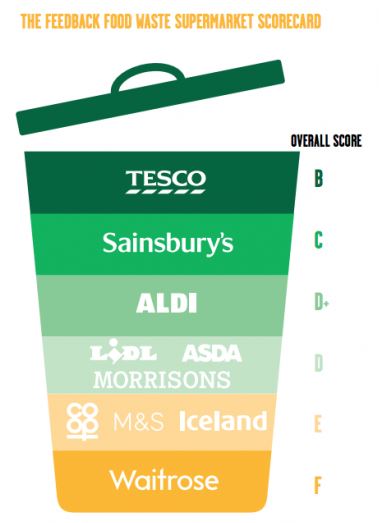 Despite this, Tesco comes out on top in the redistribution of edible surplus food, donating 7,975 tonnes of food in 2017 according to its most recent data. Tesco, along with Sainsbury’s, Asda and Co-op, works with redistribution charity FareShare, which provides food to charities and community groups.

Tesco was also the first supermarket to sign up to the UN Sustainable Development Goal of halving food waste by 2030. Only Aldi has also made this commitment, while most supermarkets have adopted the UK’s national voluntary agreement, the Courtauld Commitment, which has the lesser goal of a 20 per cent reduction in food waste by 2025 and has been criticised by Feedback as lacking ambition.

With the onus on businesses to continue to innovate and to work collaboratively to solve the plastics problem, consumer goods giant Procter and Gamble (P&G) previously made headlines when it unveiled Fairy liquid bottles made completely from PCR plastic and repurposed ocean plastic in the UK earlier this year.

The rollout, made possible through a partnership with waste management firms TerraCycle and SUEZ and retailer Carrefour, also includes a behaviour change initiative whereby consumers are rewarded for proving they are collecting and recycling beach plastics. For each picture customers upload of them cleaning beaches, P&G and Carrefour will fund the cleaning of 1sq.m of beach in Spain.

Worldwide, Ikea owns more wind turbines than stores, as it closes in on a target to become “energy independent” by 2020. Ikea now has 416 wind turbines and 750,000 solar panels, generating the equivalent of 73% of the energy it used last year.