Here are 6 countries that lead the way in sustainability, and show us in the United Kingdom how far behind we are, and what goals we should be striving towards more vigorously. 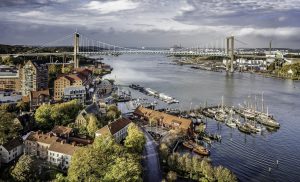 Sweden is running out of trash thanks to advanced recycling! In Stockholm, the capital of Sweden, they have adopted a system of reducing, sorting, treating and recycling waste. citizens use bags, cups and boxes made from degradable plastics, even though they cost much more than ordinary plastics.
Taking waste reduction efforts one step further, the Swedish government recently said that it intends to ban plastic utensils and other plastic items altogether. Sweden started educating citizens about garbage sorting in the 1980s, and by now people have become fully accustomed to it.
Swedish inventors have been developing new technologies, with the goal of running on 100% renewable energy and recycled sources. The Swedish government has introduced much more advanced waste collection techniques, including an automated vacuum system in residential blocks that send garbage directly to recycling centers via a network of underground pipelines.
Organic waste is used to generate biogas that is used to power cars and buses. Other wastes are also used for power generation, which supplies electricity and heating for 20 percent of the households.

Sweden’s waste incineration plants use the most advanced technology to reduce dioxin emission. People have complete access to the emission data of such plants.
Air quality is properly monitored and the data is open to everyone. This helps in instilling public confidence.
Currently, Sweden’s waste recycling rate is a staggering 99 percent; the remaining 1 percent of waste is buried in landfills. 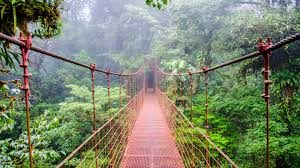 99% of Costa Rica’s electricity is from renewable sources, such as solar, geothermal, wind and hydroelectric. They are well on their way to becoming the first carbon-neutral country. They are planned to achieve this by 2021. In addition, Costa Rica is the first country in Central America to ban sport hunting in order to encourage growth in biodiversity, the impact is the protection of their forests.
Costa Ricans were recently urged to give recycling their all, through the newly launched ecolones incentive program. Within months of this, they had chalked up a world record: 30 metric tons of used plastic bottles — 65,000 pounds — collected and spared from a landfill fate in just eight hours! For a feat that would seem astonishing anywhere, tiny-but-mighty Costa Rica earned its rightful place in the Guinness Book of World Records for amassing the largest amount of recycling material ever collected in eight hours. Read more on this event here or check it out in the Guinness world record site.

An online news story about the December 7, 2018 event, organized by ecolones. You can also check it out on the Guinness World Records site. 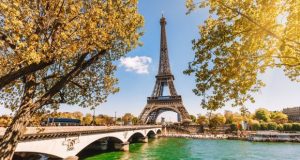 France has been shifting away from industrialization by focusing on environmental efforts. The French are leading the way in tackling food waste and have been named the world’s most food sustainable country. France’s aggressive measures to tackle food waste, promote healthy lifestyles and adopt eco-farming techniques helped it top a ranking of nations, which assesses their food sustainability. As of 2016, supermarkets were required to redistribute leftover food to charities, avoiding waste as well as going to a good cause.
They also plan on cutting reliance on chemical fertilizer and using more environmentally friendly options. Currently, 30% of energy being generated is from renewable sources and they are looking to increase that percentage. In addition, they also plan on phasing out cars running on diesel to reduce particle pollution. France has taken many impactful actions to protect and preserve the environment. 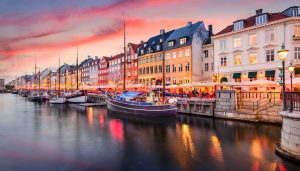 Denmark has a long-standing tradition for having a sustainable environment, clean and renewable energy as well as a progressive climate policy. Denmark has shown that economic growth and building a green society can go hand in hand.
They have announced they have set a goal to reach 100% renewable energy by 2050. Currently, 40% of their energy is generated by wind turbines. The island, Sanso is already running on 100% renewable energy, including solar, wind and biomass. The cycling culture is prevalent across the country, especially in Copenhagen which has 400km of cycle paths intricately woven throughout the city. This in turn, has helped contribute to cleaner air-quality. 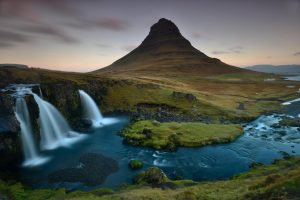 Iceland is one of the most sustainable countries in the world due to the high-water quality, low air pollution, and an effective climate change policy.
Iceland is also running on 99% renewable energy. Over 99% of electricity production and almost 80% of total energy production in Iceland comes from hydropower and geothermal power making meeting it naturally eco-friendly. No other nation uses such a high proportion of renewable energy resources. 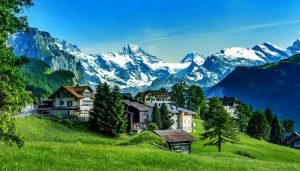 Switzerland is also increasingly known for its stance on sustainable development and preserving the environment. In 2017, Switzerland was named one of the top five countries achieving the UN’s Sustainable Development Goals the fastest. The global urban population is set to increase by 2.5 billion by 2050. The land of decadent chocolate and cheese is therefore a leader in the world of sustainability. Waste and recycling management is a priority to them. All waste is properly disposed of and the rest is turned into energy. Most of the energy is hydroelectrically generated, which lowers the country’s overall carbon footprint. They strive to preserve water-quality and maintain biodiversity by protecting land and designating these lots as National Parks.

I’m sure after reading this you will be freshly encouraged to live a greener lifestyle? We are here to help you on how to recycle better, and ultimately become more sustainable in your business – something that could help the UK take a major step to being more sustainable as a country. Check out these other blogs on sustainability:

Unisan Ltd is proud to provide a variety of innovative, flexible and customizable recycling solutions for organisations across the UK. Download a comprehensive and helpful business recycling guide here, or call us on 0300 6000 700 or email us sales@unisanuk.com to determine the right solution to meet your needs.